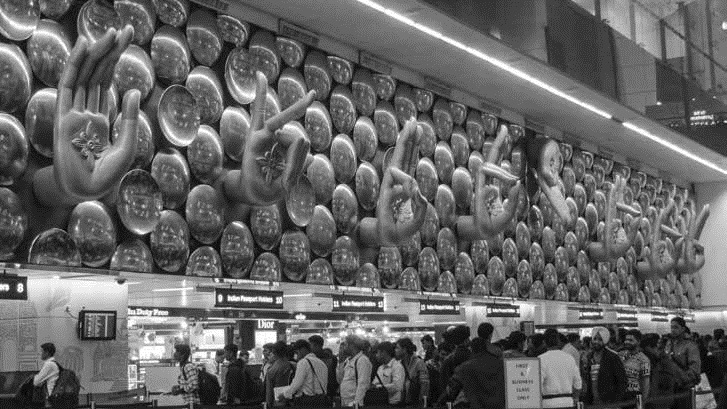 Abstract. Gestures making is one of the most important distinguishing features of Indian expressiveness in general, and performing culture in particular. Expressiveness is characteristic of all Indian public life, and it is most clearly manifested in rituals, performances, demonstrations, in public actions of both one person and whole groups. The article explores the gesture as a complex cultural category in Indian culture, connecting the area of bodily postures, movements with the domain of meanings. The focus is on gesturing systems, above all, hand gestures, in which there are a kind of “dictionaries” or “glossaries” of symbolic gestures (hastamudra) and a “grammar” — the skills of using them (viniyoga) to create an artistic text, to implement a dramatic plot. Questions are posed regarding the origin and generation of meaning within the framework of Indian theatrical arts. The concepts of mudra and hasta are analyzed in the situation of ritual and performing arts, theater and dance. The author describes two ways of using hand gestures — as a sign, and as a symbol. The patterns underlying the practice of using gestures (viniyoga) appear to be the main point that prescribes the making of meaning. The author comes to the conclusion that the domain of mastering the art of gesture in Indian performing culture is an extremely old and well-structured discipline. It achieved the greatest integrity and harmony in Hindu rituals, primarily in Tantric rites. Here, the term mudra was formed and began to be applied systematically (along with such terms as tantra, yantra, mantra, which possessed special meaning in tantric practices). It has two meanings — both the position of the whole body and the gesture of hands. At the same time, independently, in many respects independently (although in some cases, apparently, not without interconnection), a “grammar” took shape in the field of theatrical-dramatic art — gestures of the actor and dancer, and in iconography — canonical sculptural images of gods, heroes, etc. In theatrical expression, hand gestures were originally designated by the concept of hasta (literally “hand”), and the system of meaningful hand gestures was called hastabhinaya. Over time, in all these areas, as well as in various schools and areas of yoga, the term mudra began to be used actively . This, among other things, turned out to be a method of sanskritization, cultural elevation, social recognition, elevation of these  areas of bodily action, raising them to a level close to the ritual. In scenic practice, however, not all the gestures of the hands of an actor and a dancer are wise signs; a kind of “emancipation of gesture” lies at the basis of the formation of all abstract compositions, the meanings of which the viewer himself can freely “read”.