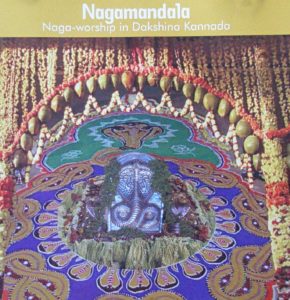 Nagamandala. Naga–worship in Dakshina Kannada. Director – Shivprasad, guidance – Dr.K.K. Chakravarty.  Film made by Indira Gandhi National Centre of the Arts, New Delhi. Duration 43:12.  “Naga or Snake worship is a hoary Indian Tradition. Naga Worship is done to ward-off nagadosha and to ensure fertility and prosperity.  For thousands of years devotes have been coming to the land of Parasurama on the bank of Kumaradhara River, pilgrimage to the sacred Kukke Sri Subramania Kshetra. The film highlights the co-existence of traditional folk and classical belief system in temple rituals, agrarian theories and practices and, Naga as in the six realms in Buddhist tradition”.

Theyyam. A ritual art form of Kerala. Production – Invis Multimedia, Kerala. 2007. Duration 24:00. “Do you hear the clanking of anklets? If yes, the Theyyam season in Malabar has arrived. In Malabar, every year, for a period lasting from December to May, the gods are believed to leave their lofty abodes to make a series of touchdowns in the many sacred groves attached to the ancestral houses and temples here. Worshiped by the local communities, the deities and even ancestors of a region take the form of Theyyams, which are resplendent motifs, adorned by members of certain communities”.